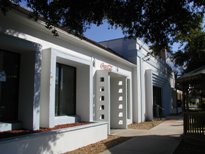 The All-American drink was introduced to Citrus County in the early 1900's. W.T. Baxley acted as a sub-bottler to the Tampa Coca Cola Bottling Company, and began bottling it in Hernando in 1906. Empty bottles were washed in Hernando Lake, then filled and transported by horse drawn wagon to Inverness. In 1914, World War I was underway in Europe, and the phosphate mines in Hernando started closing. W.T. Baxley then moved his building and business to Inverness behind his home at 110 N. Pine Street. After Mr. Baxley's death on December 29, 1931, Mrs. Pearl Baxley headed the operation in this brick building at 112 N. Apopka Avenue. In 1933, the Inverness plant bought the Brooksville territory. Mrs. Baxley died in May of 1960 at 85, and son, Carey Baxley, and daughter, Ina Lee Baxley Green, continued the business. 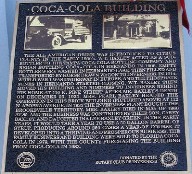 In the early years, it would take a year to use a 50-gallon barrel of syrup, producing around 250 cases a year - of course, it developed into a thriving and prosperous business. The family business and building were sold to Florida Coca-Cola in 1979, with the County purchasing the building from Coca-Cola in 1983.