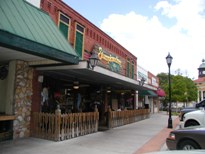 The Dime Store
Best remembered as Allen's 5, 10 & 25 Store, it was built by Jack Kibler in the early 1920's. Occupants included the Inverness Post Office, Vann's Drug Store and Ernest Johnston's Restaurant prior to Allen's opening in 1932. For 53 years George A. "Pop" Allen and his son, Otto operated the dime store, that was billed as "one of the most modern department stores in South Florida" in 1932. The store supplied everything from hardware, farm supplies, yard goods, clothing for the family, footwear, glassware, toys and stationary.

During its peak, 6 employees served customers and Saturday was the day most families came to town to shop. Stores would stay open until midnight to serve families who attended a late movie, or came to town to visit on "the square". In the early 1940's youngsters in Inverness would buy their comic books and toys here. 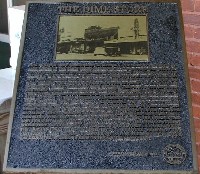 As one of Citrus County's most successful businessmen, the Allen family also owned and operated a hardware store and lumberyard. Otto Allen closed the store in 1985 and donated memorabilia to the Citrus County Historical Society where they are currently on display at the Historic 1912 Courthouse. The building was then occupied by A-Z Furniture, Seaweed Sam's Restaurant, Main Exchange Restaurant, and at the time of the historic plaque dedication on September 11, 2001, Stumpknockers on the Square Restaurant.
Council Meetings & Agendas
Notify Me
Employment
Bill Pay
Business Directory
Forms & Permits
City Council & Mayor
Let us help you find the Mayor & Council information.
Volunteer Opportunities
Learn More...
City Budget
See your tax dollars in action with the latest information.
Parks & Recreation
Let us help you find Resource & Rental information.
Valerie Theatre
Discover a cultural experience in Downtown Inverness.
Government Websites by CivicPlus®
/QuickLinks.aspx
[]