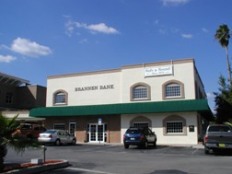 The Bank of Inverness 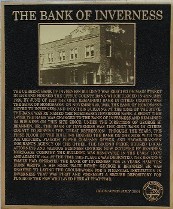 Under the direction of George H. Brannen, Sr., the Bank of Inverness was the only bank to survive the "Great Depression". Through the years, the first floor of the building housed the bank on one side plus the IGA grocery store, Florida Power Company office, and Hagar-Brannen insurance agency on the other. The second floor housed local attorneys and various business offices, and is now occupied by Brannen Mortgage Company. The building was renovated in the early 1960's and again in 1994. At the time this plaque was dedicated, the Brannen family had operated the Bank of Inverness for 75 years. Hampton Dunn wrote in his book Back Home "George H. Brannen, Sr. was devoted to laying the groundwork for a financial institution in Inverness that was first and foremost a secure depository for funds of the few who lived here at that time."