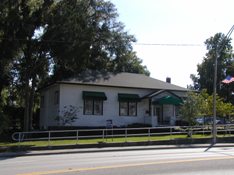 Woman's Club
This building at 311 W. Main Street was reportedly constructed in the early 1900's as a library. Schools Superintendent R.L. Turner later occupied it until the 1912 Courthouse was constructed and his office moved there in 1917. The Woman's Club of Inverness was formed. The building was enlarged in 1922, paid off in 1926, and then became a library. The Kiwanis Club, chartered in 1925, was also housed here in 1925/26, and the members of the Woman's Club served lunch to the Kiwanis members to raise funds in the early 1960's. The library was moved to another location and became a branch of the Central Florida Regional Library System.

The Inverness Woman's Club was active during WWI, forming a committee for the Red Cross and rolled bandages as well as knitted sweaters, scarves and lay covers for the servicemen. They planted oak trees at the grammar school, naming them for Inverness boys in the Armed Services. The Junior/Senior Prom was held here in 1945. The Inverness Woman's Club organized the first PTA in Citrus County, and furnished a room in the late 1950's for the newly build Citrus Memorial Hospital. Woman's Club community services included aiding meals on wheels, Citrus United Basket, Inverness Care Center, Hacienda Girl's Ranch, Girl and Boy Scouts, Red Cross, Cancer Society, Heart Association and All Children's Hospital.